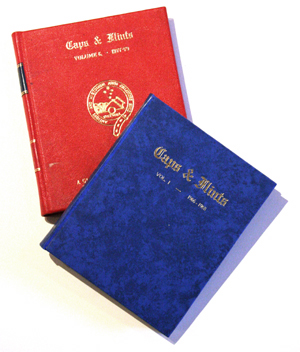 Caps & Flints is the journal of the Antique & Historical Arms Collectors Guild of Victoria and has been published continuously since 1966. The journal is one of the many benefits of membership of the Guild and features a range of interesting articles and research by Guild members and guest authors on various aspects of arms, accoutrements and militaria. Since its first edition in 1966 the presentation of Caps & Flints has changed markedly over the years, However, the journal’s central aim of presenting leading arms research for the Australian collector remains a consistent expression of the Guild’s endeavours.

To view a selection of articles that have been published in recent editions of Caps & Flints, click here

This is a cumulative index of the articles that have appeared in Caps & Flints since it was first published in 1966. A major theme of the articles that have been published in Caps & Flints over the years is the study of Australian arms and militaria. It is felt that the index will provide a useful research tool for students of Australian military history, as well as being a useful reference for the collector. But in saying this it must also be pointed out that Caps & Flints has published many valuable articles on firearms and militaria matters not connected with Australian history. These are commended to researchers as well. The index has been arranged alphabetically in three main sections. In addition indices of regular segments have been provided. Unfortunately we are unable to provide individual copies of the pre 2000 back issues, but we can provide a copy of the requested article for a fee to cover copying, postage and handling.

Stay up to date with our latest news and events.